We made it to Cairns!!! Thank goodness!!!!! I am well and truly over free camping.

Let me just explain my past experiences with free campsites before I launch into a description of my recent experiences.
When Ben and I have travelled with the kids in the past, the free campsites we have stayed at have been some of our favourite places to stay. Whether we were in the middle of the desert in the NT staying under what looked like a dome of stars, or camped on the banks of the Murray River in Victoria the free camp sites were always clean, picturesque and relaxing. We used to use a book called Camps 5 that listed all of the free campsites around Australia. As the updated Camps 9 book is $49.95 (too expensive and bulky) I was excited to find a $7.99 app called Wikicamps. It’s easy to use and lists free camps, as well as caravan parks, points of interest, day use areas and so on. What’s better is that people who use Wikicamps can add comments about the site so the information is always being updated.
Armed with Wikicamps I was sure our overnight stops on the way to Cairns would be as lovely as the ones we’ve had in the past. WRONG!!!
The free campsites along the Bruce HWY between Cairns and Brisbane are absolutely disgusting (well, the ones we looked at/stayed at anyway). They are minefields of human waste and rubbish and smell like a giant sewer. I don’t get it. Why don’t people dig holes?!? Or use the toilets???? Even some day use areas had piles of human waste everywhere (complete with the brown stained toilet paper sitting next to it). It’s enough to make you vomit. Rubish is everywhere. I’m sure that Qld has lots of picturesque, waste & rubbish free camp sites off the highway but when you have 2000km to travel in 2 days you don’t really fancy driving 20km from the Bruce to find a nice spot (although I wish we had of!!).
The reason we didn’t just pay to stay in a caravan park is because we didn’t really know where we would end up for the night until late in the evening. Ben would say at about 7pm “I’ve only got a few hours left in me” and then I’d get on my Wikicamp app and list all the places we could stay for free. Generally, we’d pull up between 9pm & 10pm, sleep (or try to sleep) for 8 hours, then get back on the road nice and early. Caravan parks generally want to charge us upwards of $90 a night. It’s usually about $40 or $50 for the site including 2 adults. Then they charge $10 or $15 per extra kid!!! When you are only spending 8 hours somewhere that is a pretty steep charge.
Currently we are staying at the Coconut Resort (Big 4) in Cairns. We are spending two nights here and I wish it was longer. I don’t mind paying $90 a night here because it is so lovely. The kids are entertained, it has the BEST water park and playground I’ve ever seen, the biggest jumping pillow in all of Australia (or so they claim) and so many activities for the kids to do. I think you could spend a week here and the kids wouldn’t get bored.
The kids have been busy writing in their diaries, watching the outdoor movies, swimming, playing in the playgrounds, annoying the crap out of each other, annoying the crap out of me (and probably Ben), whinging for food (mostly Rohan) and spending their pocket money.
My mum ever so kindly gave the kids some spending money for the trip with the instructions that it could not be spent till they reached up North. Consequently, as soon as we arrived in Cairns yesterday late afternoon, Rohan began rabbiting on about spending his money. This lasted aaaalllll night and picked back up early this morning. At about 8:30am this morning he finally wore me down and I sent him off to the gift shop here at the Coconut Resort so he could spend his money on a grossly overpriced plastic snake. In a bid to encourage more reading (which has the added benefit them being quiet whilst doing so) I’ve told the kids that they can earn money by reading books on their Kindles. So far Jazzy has read the entire Peter Pan book (original version) and Rohan is half way through the book “Lion” by Saroo Brierly. I’m regretting my decision to give them more money as I’m imagining this trip will be spent with Rohan either frantically reading or relentlessly badgering us to spend his money. Anyway, I’d best be off. Kids want to go for a swim so I’m going to go slob by the pool and read a book. Ben is spending quality time again with Frankie, who still needs a bit of tweaking to stop 6 million alarms she is fitted with from being so sensitive.
Thanks for reading!!
Mrs Frankencruiser xxx

Catching up with one of my besties who I met while living up in the Torres Straits. 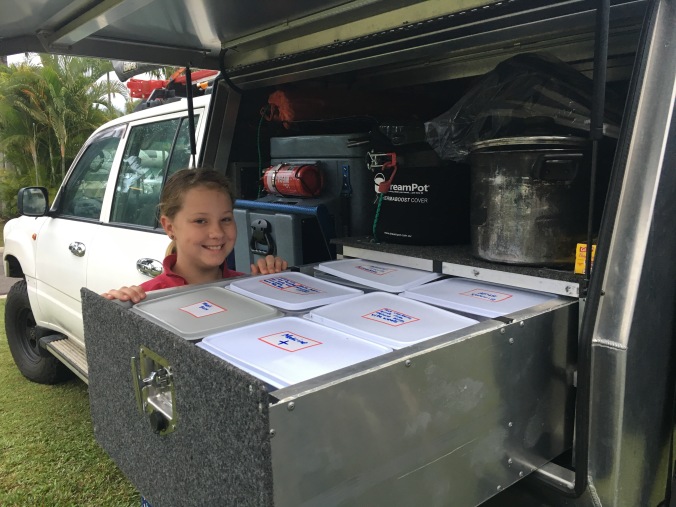 Picture of one of Frankie’s drawers. You can se the freezer in the background (with a drop down fridge slide) and my Dreampot all nicely snuggled in the bracket Ben made for it.

Keeping up to date with their schoolwork. 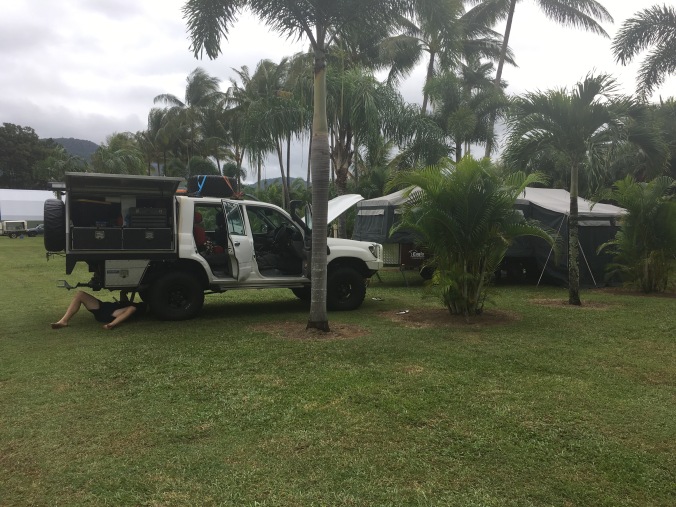 Ben spending the morning under Frankie (I swear he loves her more than me 🙄). 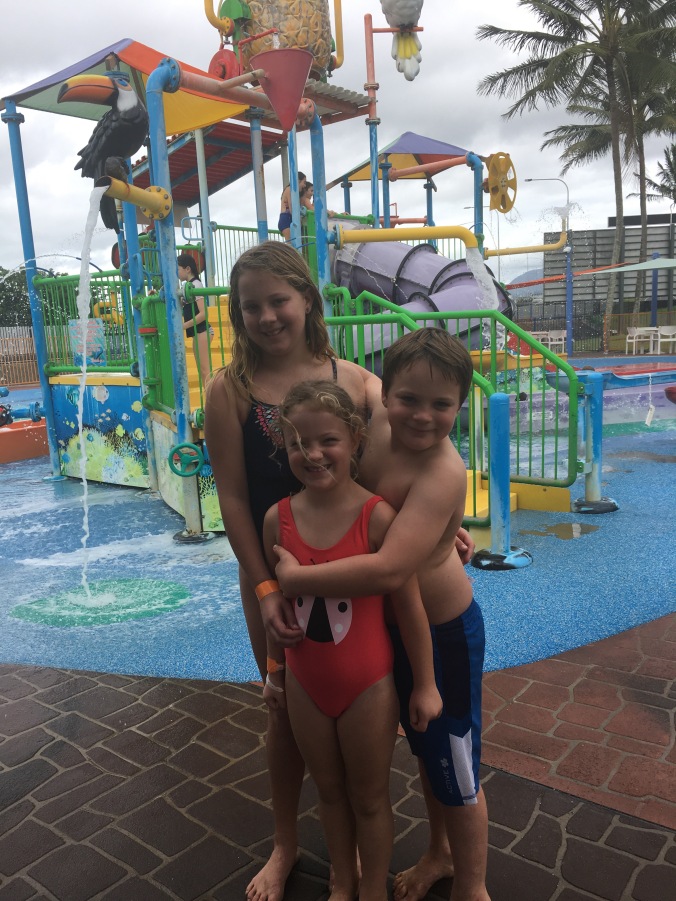 Kids about to go swimming. 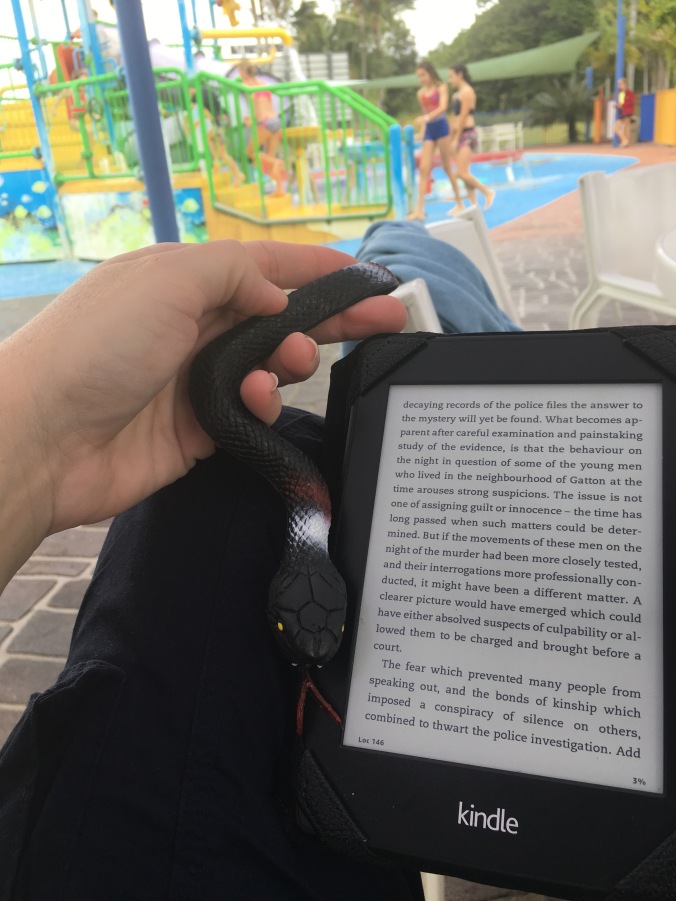 Reading my kindle while watching kids in the pool & minding Rohan’s rubber snake.