This is going to be a very short blogpost as today has been extremely uneventful. Our day is as exciting as the blogpost title alludes.

We hightailed it out of Seisa and spent the day travelling, stopping briefly for lunch at Bramwell Station. Bramwell Station is the last place you can get fuel before embarking on the old telegraph track Nth bound and good old Bramwell uses this fact to his uptmost advantage, charging 50 cents more a litre for diesel than most other service stations around the Cape. This is not due to being extra remote as there are other service stations that are more remote that charge a lot less.  Ben was none too happy to pay $2.00 a litre for fuel there when we were heading North.

We stopped in at Bramwell today only because it was the only place around at lunchtime & we hadn’t planned anything for lunch.  All the comments I’ve read on Bramwell Station are either horrendously negative (expensive fuel, expensive everything) or are gushingly positive reviews of its burgers. We decided, in fairness, to try out the burgers in order to form a balanced opinion.

Six burgers cost a small fortune. I’ve spent less taking the kids dinner at the Hilton (can’t disclose cost cause Ben would faint from shock if he knew). They were okay. Pretty much a beef patty sandwiched between a bread roll with some onion, cheese & a bit of old salad. Perhaps if you’d been living off crap camping food (baked beans etc) you might declare it to be “the best burger you’ve ever eaten!!” but we’ve been eating like kings, thanks to my forward menu planning & Dreampot.  So nope. I’m not a fan of Bramwell. It’s only redeeming or interesting feature is its collection of old number plates and flushable toilets.

We arrived in Coen this afternoon & Ben diligently made a few adjustments & tweaks to his most favourite creation, Frankie.

Poor old Kylah stepped on hot coals & has burned the bottom of her foot. I gleefully grabbed one of the 3 first aide kits (that Ben declared overkill) and lovingly cared for her injured foot, applying all the knowledge I acquired in my first aide course. After I had dressed the burns all the kids enviously inspected my handiwork (pretty sure they all thought it was totally worth it to step on hot coals cause you get such lavish dressings tentitatively applied to your foot).

Tomorrow we are going to Lakefield National park. Apparently it has the largest Croc population in Nth Qld. We are booked in for 4 nights void of mobile coverage, but I’ve already threatened to pull the plug at 3. There will be lots of wetlands, mozzies, crocodiles & zero swimming opportunities.

To be honest I’m in a bit of a rut at the moment. I’m a tad homesick & over everything being covered in red dirt.  But I’m trying to be a good sport & am mustering the highest level of enthusiasm that could possibly be believable when one is faced with 4 days camping in a mozzie infected swamp.

Hopefully my next post, in 4 days time, will be about how wrong I was (as is often typical) and how spectacularly beautiful the place was. I also hope that I do not have to report back that anyone has been taken by a crocodile.

P.S. Rohan is 100% determined to uproot us all so he can live in Umagico. He made BFF’s with some local kids there & fit in really well with them. Ben said the boys came & got Rohan yesterday afternoon & they all just took off playing. The kids even tried to teach him some of their language. Rohan now has a new pen pal & a burning desire to return really soon!
PICTURES!!

Bramwell Burgers: (don’t let Rohan’s cheerful face fool you, that kid’ll eat anything so long as it doesn’t contain butter or cheese)

Rohan’s dirty foot & Isabelle looking once again like no one owns her (at least she’s clothed!). 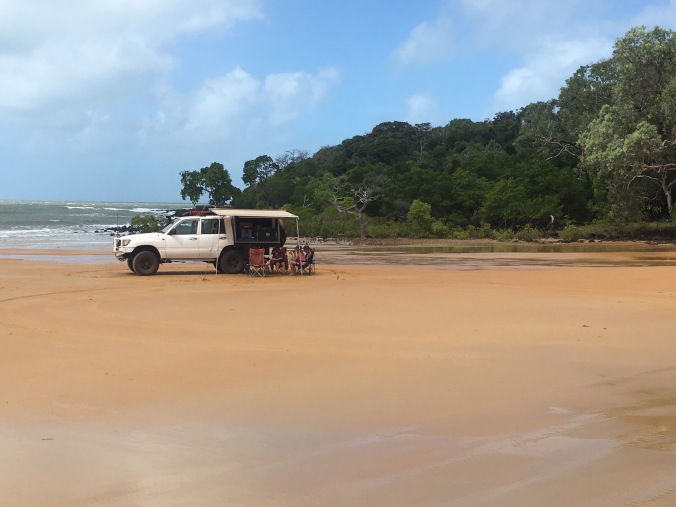