Lakefield National Park is like a magnet for fishermen, crocodile enthusiasts and bird watchers alike. Three activities that I find mind-numbingly boring. So my apprehension about spending 4 nights here was justly warranted. Miraculously Lakefield National Park had one major drawcard that made me fall instantly in love with it – It is almost completely and eerily lacking in flies and mozzies – my two great enemies who have conspired to ruin almost every aspect of this holiday for me. Amazingly, despite the abundance of the buggers, I have managed to so far avoid having a single insect bite – ANYWHERE ON MY BODY!! I think this is a feat which proves that I am far superior and gifted in the areas of diligence and commitment than I am usually given credit for. Ben admiringly say’s “when my own personal comfort is at stake, there is no cutting corners. For everything else however, near enough is good enough”. (I’m positive this is a compliment…)

We had booked to stay at a campsite called Mick Fienn camping area, site 4. This spot was chosen due to it’s availability, not because of it’s location or reviews, so I was completely suspicious. All the other campsites were booked out except this one – not a great sign. Driving in, the bush ranged from dry and scrubby to burnt out and prickly with pockets of greenery around the numerous billabongs and creeks.

Thankfully our campsite gained my approval. It is secluded, flat and clear. It is also up an embankment from the nearby creek, leaving us with a gorgeous view and access to fresh water, but not in any danger of wandering crocodiles. We are so remote and secluded, that you can wander around nude without fear of any other human being stumbling upon you (Much to Isabelles delight and Rohan’s dismay). We didn’t bother to erect the shower tent and instead have been showering each night naked under the stars. Ben bravely collects creek water which we then heat up before running a 12 volt pump from the car to the shower head, that is attached to a gum tree, not far from our camper trailer. Bliss!!
The one down fall is that the campsite is very dusty and what little grass there is is dead and bristly. Isabelle and Rohan have adjusted brilliantly to this new lifestyle. So much so, that if you happened to come upon them and had no prior knowledge of who they were or where they were from, you might surmise that they had been born in the bush and have never even been in the vicinity of a shower or washing machine, let along used one. Their clothes are so stained that I have resigned myself to the fact that on our return home, I will just transfer all of the clothes in their bags to the area in Ben’s shed that is occupied by rags. On the upside I won’t have as much washing to do!! Their skin is so stained with dirt that I find myself wondering whether they are getting very tanned, or just have a perpetual layer of dirt on them that doesn’t scrub off.

Yesterday we went Croc hunting and I realised why all my prior Croc hunting pursuits ended in failure. In the two years I spent on Horn Island, which is apparently an island surrounded by the beasts, I partook in many the Croc hunting adventure. These hunts always involved lots of alcohol (to fuel our bravery), cigarettes (calm our nerves), Crunchie Icecreams (cause they are delicious) and a green 4wd (so we’d blend into the bush) but never produced so much as a glimpse of a crocodile. If it had not been for the dead crocodile I stumbled across on the jetty one Saturday morning, with a spear hanging out its back, I might have come to the conclusion that there were no crocodiles in the Torres Straits and it was all a big conspiracy to scare the living daylights out of me and prevent me from enjoying those beautiful turquoise beaches.

Yesterday our mission did not end in failure. We drove around from billabong to creek to river in search of them and managed to spot 2. We had our best success at a beautiful spot called 7 Mile Creek. I hopped out of the car, along with the rest of the gang, admired the beauty of the creek with it’s lily pads and flowers, snapped a few pictures of the kids then hopped back into the car to read my kindle. Ben stealthy approached the bank (not too close) bent down silently and looked. And looked. And looked. Finally he said to the kids “Oi! Give me the binoculars! I’ve got one!”. I at this point jumped back out of the car, my interest finally piqued. Ben explained the spot he was looking at and I could just make out the very slowly moving eyes. I could have sat on the bank of that river for a million years and not been able to spot on my own what Ben was able to see. It seems that to make a good croc hunter (hunter in the sense of feeling triumphant when finding one, not actually killing them) you need to have a lot of patience and keen observation skills. Two areas where I am completely and utterly deficient.

The kids were all thrilled that they had seen a crocodile in the wild and I was thrilled that I wouldn’t have to listen to them harp on about seeing a crocodile in the wild (and also that I’d finally seen one after years of failure). My delight was short lived however as Rohan almost instantly switched over to harping on about seeing a Cassowary in the wild, or if not in the wild then he wanted to have a Cassowary encounter at the Kuranda Bird Place (I’m sure it has a proper name but that’s what he calls it so we’ll go with that).

Today was spent lazing about the campsite. The kids were presented with two options: go to Bathurst Head (an un-swimmable but beautiful beach which was a 2 hour drive each way) or hang about at camp. They went with the latter.  It was quite a nice day. Kids alternated between playing together so nicely that it made my heart swell, and screaming blue murder at each other. I’ve decided that the card game “Go Fish!” is not to be played when I am around as it inevitably ends with screaming matches because someone (Rohan) is cheating. Ben played a game called “Spot It” with the kids and they were all in fits laughing. They also played games like “What’s the Time Mr Wolf?” and “44 home”. Thankfully everyone left me to my own devices today and I was able to do a TON of reading.
I have loved reading this trip and have read more on my Kindle in the last 3 weeks, than I have in the last 3 years. At the moment I am halfway through a book called “Arctic Adventures” that was written by a Dutchman in the early 1900’s. He lived with Inuit tribes and describes their lifestyle – it’s absolutely fascinating how they lived.

Today I had another opportunity to make good use of my First Aide kits. Kylah has a bad case of “Imissmyanimalsitis” and I had to get my brand new thermometer out to prove she didn’t have a temperature and was just hot because it is really bloody hot here. Rohan hurt his toe and unfortunately wanted me to dress if for him. All the saline solution in the world couldn’t have cleaned his foot up enough to get a bandaid to stick but to stop him whinging, and because it was a nasty cut right in his toe crevice, I did my best. The bandaid stuck to it for about 30 seconds but apparently that is enough for the magic of placebo to take effect.

Tomorrow we move on to Cooktown and I’m excited to make use of a proper washing machine. All this hand washing is driving me bonkers. I’m also excited to hopefully be able to purchase some fresh fruit. The kids have been living on dried apples, apricots, blueberries and mangoes and the smells they have been producing (in the confines of our car) are enough to make you wretch and gag. They have completely eaten us out of dried fruits, all that is left is a packet of prunes, and I’m not game to let them loose on them!
I’m going to miss the serenity and seclusion that this campsite has given us. It has been a very relaxing few days.

P.S. Jazzy has been an absolute delight!! Not whingy, sick or dirty. Which is why she hasn’t had a feature story. 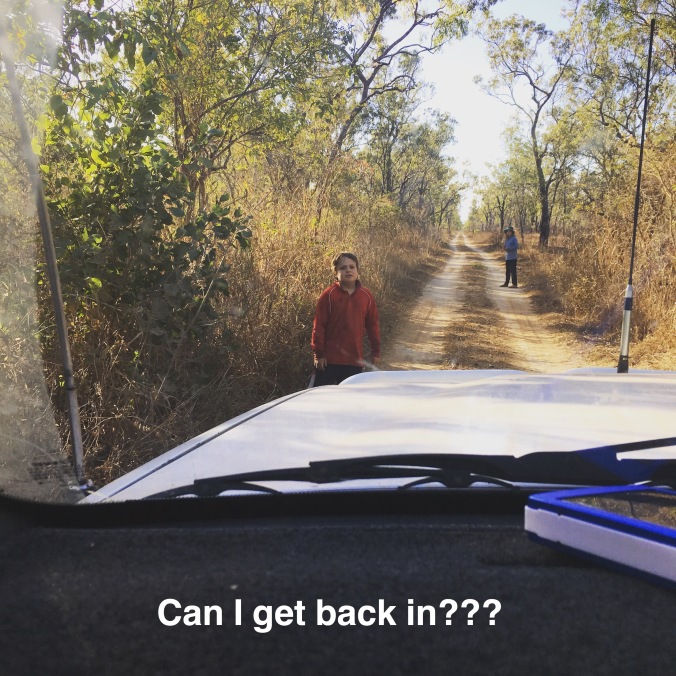 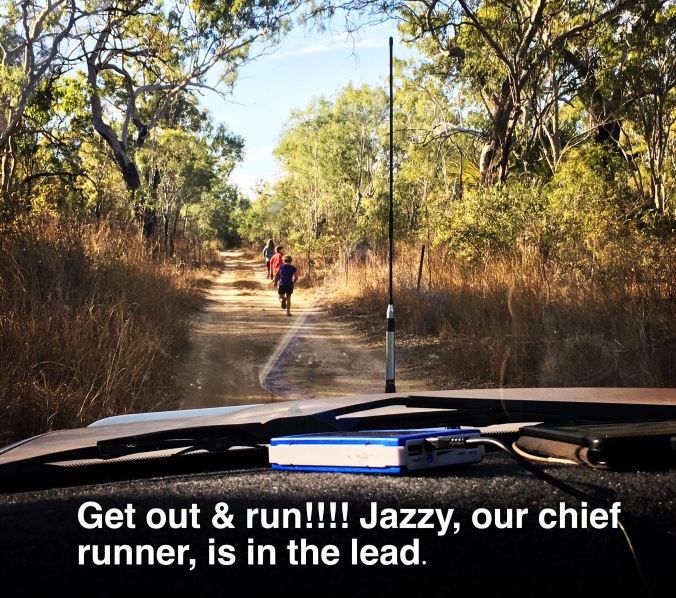 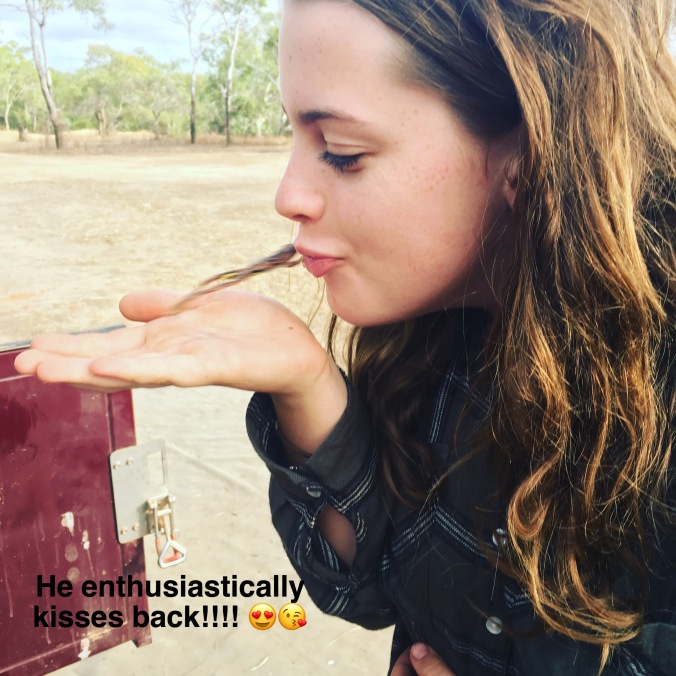 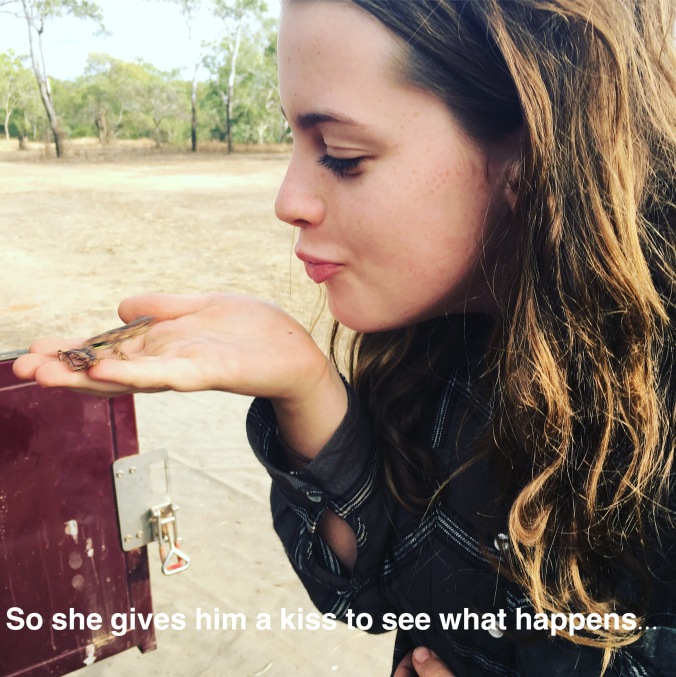 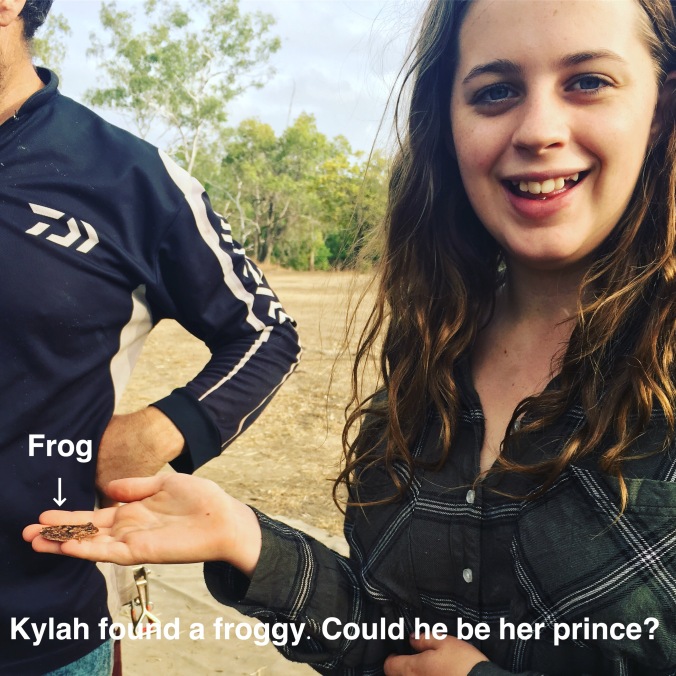 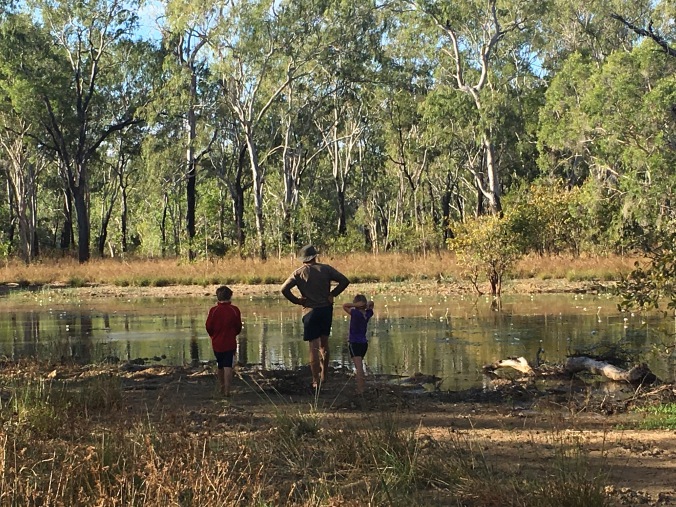 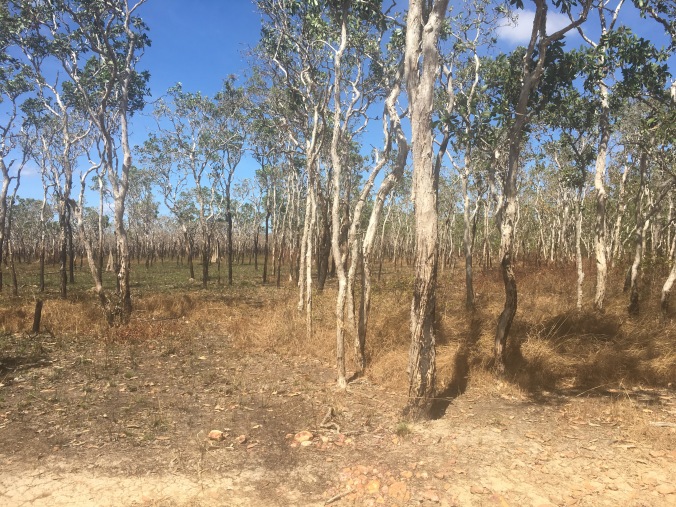 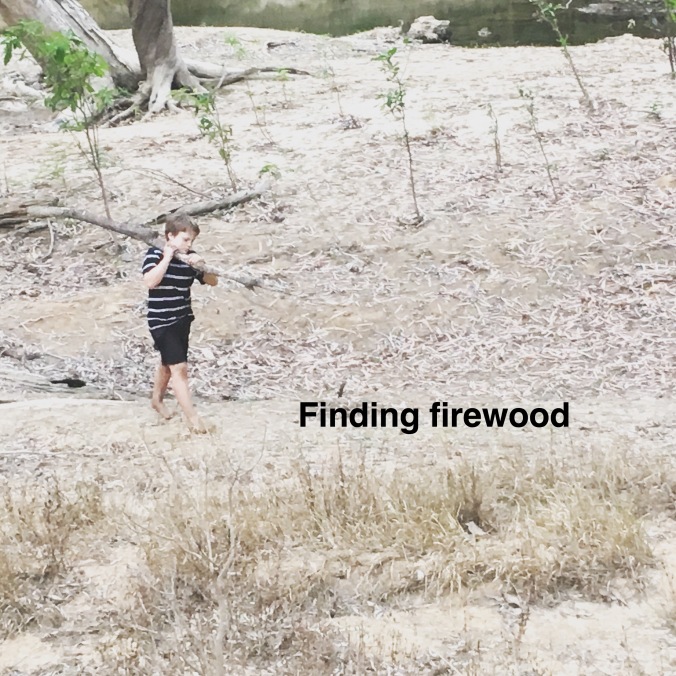