Our first morning at Cape Trib was an early start for Ben, Rohan & Jazzy who had decided to conquer Mount Sorrow.  I had ever so thoughtfully packed for them the night before and included lots of water, muesli bars, insect repellent (on account of the mozzies and leeches) and had considerately assembled a mini first aide kit for them to take.  I carefully explained to Jazzy what the first aide kit contained and what it should be used for.  This was met with a lot of eye rolling and groans from Ben, who did not see medical items being essential to the hike.  Lucky for me Jazzy is a bit of a worry wort and happily lapped up all of the useful knowledge I was imparting on her.

Whilst they were off on their hike Isabelle, Kylah and I happily slobbed on the beach. I even managed to squeeze a nap in on the beach.  It was a perfect morning.

The energetic members of our crew arrived back in time for lunch, which was zucchini, tomato and red lentil soup.  Jazzy excitedly told me that the first aide kit had been useful for a number of things.  Rohan, after being told not to touch anything, decided to touch a thorny vine which left prickles in his fingers.  Ben had to dig them out with the splinter digger thing I had put in the kit.  Rohan also had lips so badly cracked that they were bleeding and Ben had used some of the Blistex on them (also a first aide kit item).  I was thrilled!!

Apparently the hike was loooooong and hard.  Thank goodness I had the foresight to stay at camp and vege out on the beach!!  I had a look at the photos they took and it did look nice.  Not nice enough to make me want to hike the mountain though.

Our afternoon was spent lounging on the beach.  Ben and I were plonked in our chairs with our kindles and the kids spent their time burying each other in the sand.   We set up a cheese and dip platter on the beach and gorged ourselves happily while watching the waves.

Ben must have been in a good mood because he challenged the kids to another race, and gave himself a handicap so that they had a good chance of winning the ice-cream factory tour.  The kids won!!  Wahoo!!  They were expecting to be taken immediately to the ice-cream factory but Ben said they’d have to wait till Monday to go.  The excitement was short lived.  Two sleeps is like an eternity when you are 9.

Today was spent exploring Cape Tribulation and it’s many, many boardwalks (or “boredwalks” as Kylah declared them to be).  There is no doubting that Cape Trib, with it’s gorgeous rain forest greenery, is beautiful.  The problem it has however is that it’s over run with tourists swarming everywhere like bees round a hive.  We have been quite spoilt up the Cape, with many of the stunning places limited to those who have the 4wd means of getting to them.  Cape Trib is easily accessible and the constant influx of backpackers and tourists is testament to this.

The board walks were visually stunning. The rainforests at Cape Tribulation are prettier and greener than any I’ve encountered previously in my travels. It almost feels like you are walking through a green tunnel made from interwoven trees, vines, leaves and flowers. Even the moss and fungi are unique and beautiful.

I busied myself snapping pictures of things that struck me. Leaves with tiny holes in them (eaten by some kind of grub) that let sunlight sparkle through, moss that is mottled with a rainbow of colours, the majestic fan palms and unusually shaped fungi. Ben shot me an amused look as he saw me taking close up pictures of fungi. “Don’t laugh.” I told him seriously “that is what will be growing off your feet if you don’t start wearing shoes in public toilets/showers”.

Pictures for me are a very important part of my holiday. Don’t worry, I’m not one of those people who take 6 million photos of random things then invite people over to watch a 6 hour slide show (this has been done to me before & I claim it to be akin to torture!!). Generally I have a rule that photos must have a person in them in order to be shared on social media. Occasionally a striking landscape pic or animal pic will sneak through. The photos I take are for myself to help me remember, and adequately describe what I’ve seen.  You see I can’t visualise anything in my mind. When I close my eyes I don’t see anything at all. So when I see something, the minute I turn away from it it’s gone forever. All I am left with is the memory of what I thought about it. My mind is literally filled with words.  Most people find it very weird that I can’t close my eyes and conjure up an image of something/someone. I find it weird that they can!!

My writing is just the flow of thoughts from my mind out of my fingers. Generally I’m quite surprised when people tell me they find it funny. Sometimes I will reread things over & over again looking for the funny bits, which I can never find. But I’m glad my thoughts entertain some of you anyway.

Back to the story… our main aim for the day was to see a cassowary in the wild so we could finally shut Rohan up. I was very dubious about what success we would have. My crew are pretty noisy. Between shoes stomping on the board walk, to coughing, snorting, whinging and shushing each other – the cassowaries would have run a mile before we left the car park. I was right. But it didn’t stop Ben from trying.

After our third boardwalk with not a single animal being sighted, kids and I were ready to give up, go home & eat scones (that I’d baked in my dreampot) on the beach. Undeterred, Ben decided that after dinner we would return to the biggest of the boardwalks & try again at night. Everything you read here tells you about how the rainforest is teeming with animals once dark falls. Surely we’d have more success right?

We ate our dinner back at camp, tidied up, enjoyed our final shower naked in the rainforest & got ready for our night walk. Ben lined all the kids up & put headlights on them. He gave them all very strict instructions on being super quiet and making not a single noise. Kids all nodded solemnly.

The walk started off with Isabelle quietly whimpering while clutching my hand as she wasn’t given the red torch and didn’t want a headlight. As we went on her quiet whimpering grew more intense as she decided she was tired & wanted to go home to bed.  Rohan kept turning around and shushing people (he was as serious about this trip as Ben was) in the process blinding them with his headlight. “Stop looking at me Rohan!” the girls & I would cry out. This would be met with another “SHUSH!!!” from Rohan accompanied by a blinding flash of light.  Then Isabelle discovered that her thong could make very convincing fart noises when dragged along the boardwalk. This kept her happily entertained but absolutely enraged Rohan. “You kids are about as stealthy as a bull in a china shop!” Ben muttered. It’s not often that Ben gives up on an idea but after 40 minutes of my lot noisily tramping around, he admitted defeat.

All was not lost. We saw a rat, a toad, a moth & a fish. Ben claimed that the rat we saw was a very special native rat that is unique to this area. Looked like a rat to me. Jazzy said that the moth we saw was a butterfly so she was happy with her sighting.  Oh!! I almost forgot, a mozzie flew in my ear (the only part of me that wasn’t covered in Insect repellent  containing 40% deet) so that gives us a total of 5 sightings. Not too shabby!!

Tomorrow we leave Cape Trib & head to Cairns, stopping at the ice cream factory along the way. This time next week I will be home!!!! There was a time on this trip where I really missed my home, my cosy bed & shower head so large you feel like your under a waterfall. But now I’m starting to feel like I’m going to miss adventuring. Oh well, we are already planning next years trip so at least I’ll have something to look forward to!! 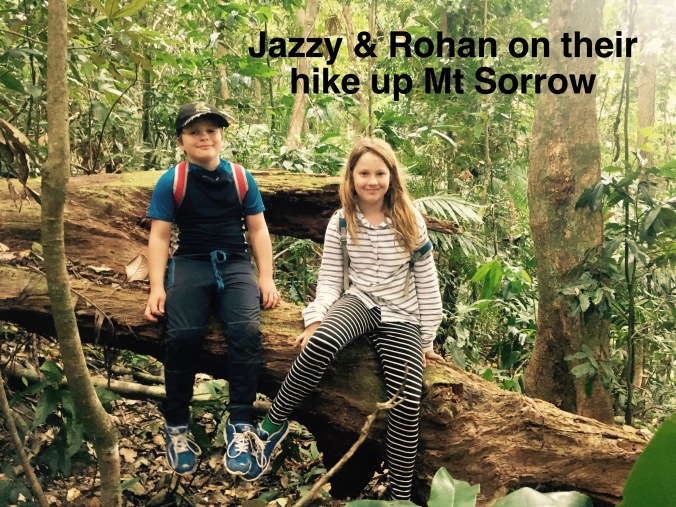 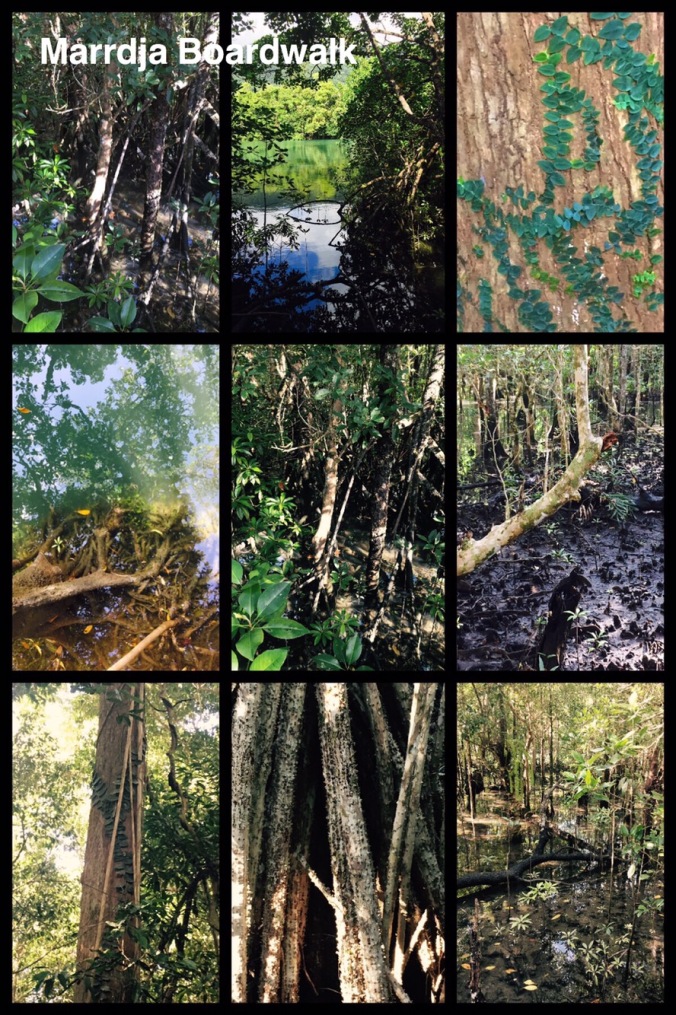 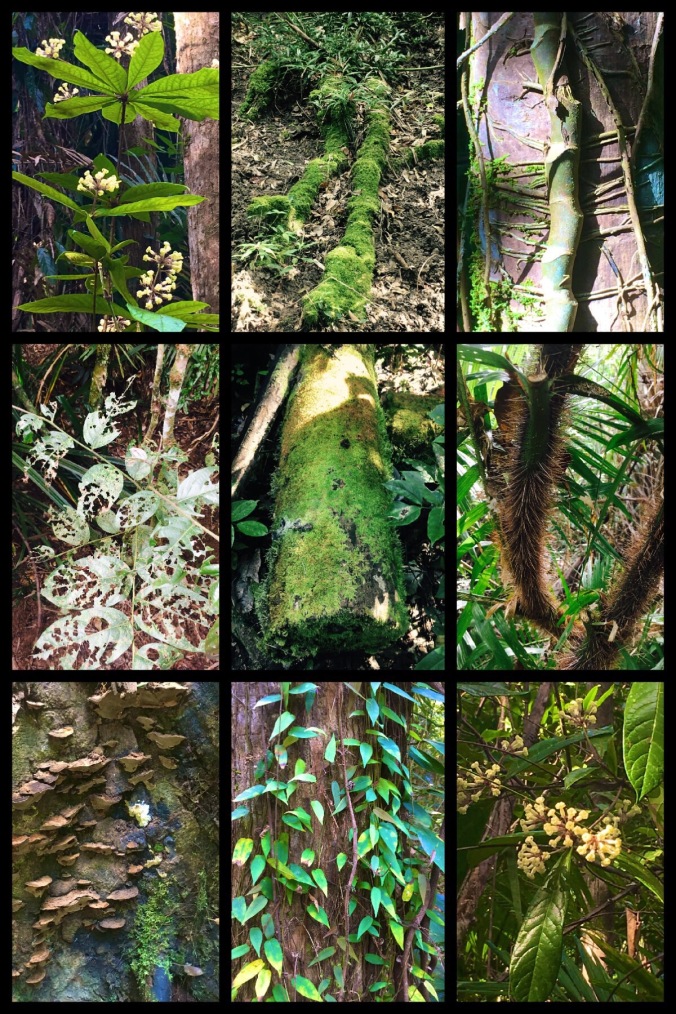 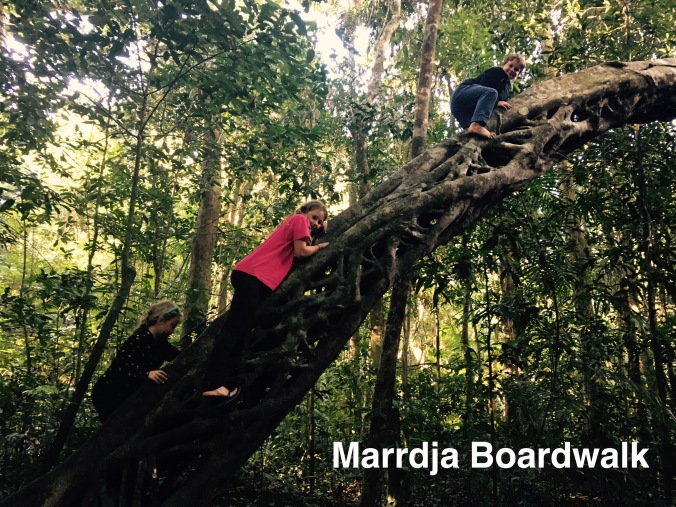 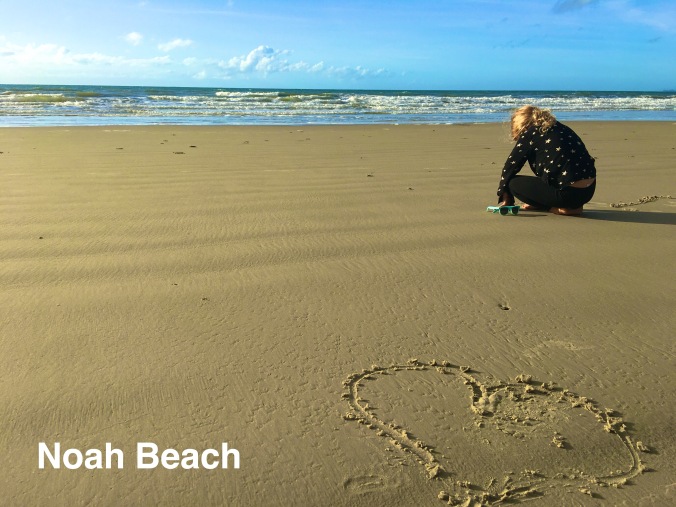 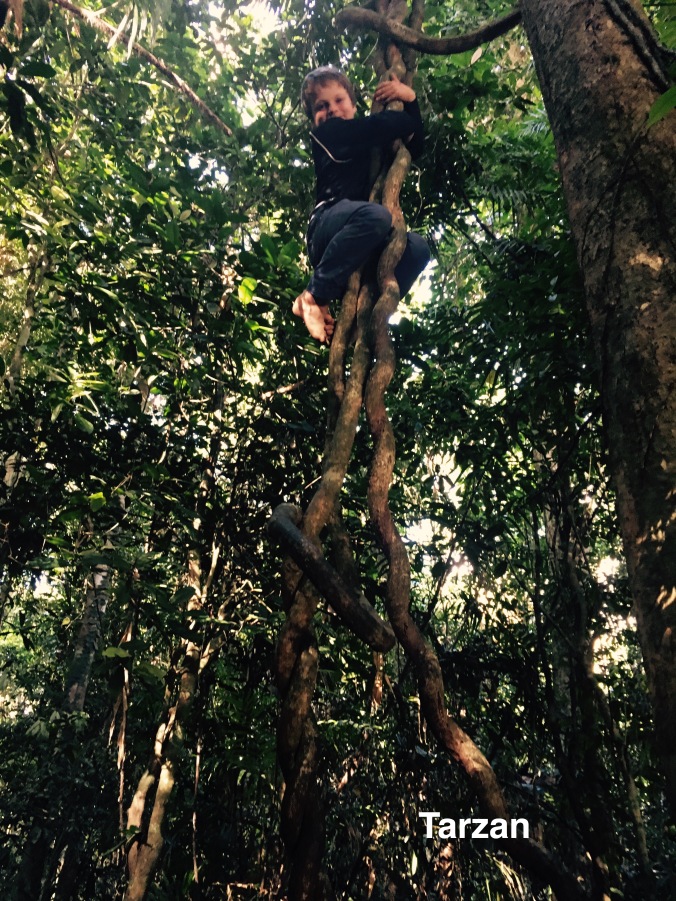 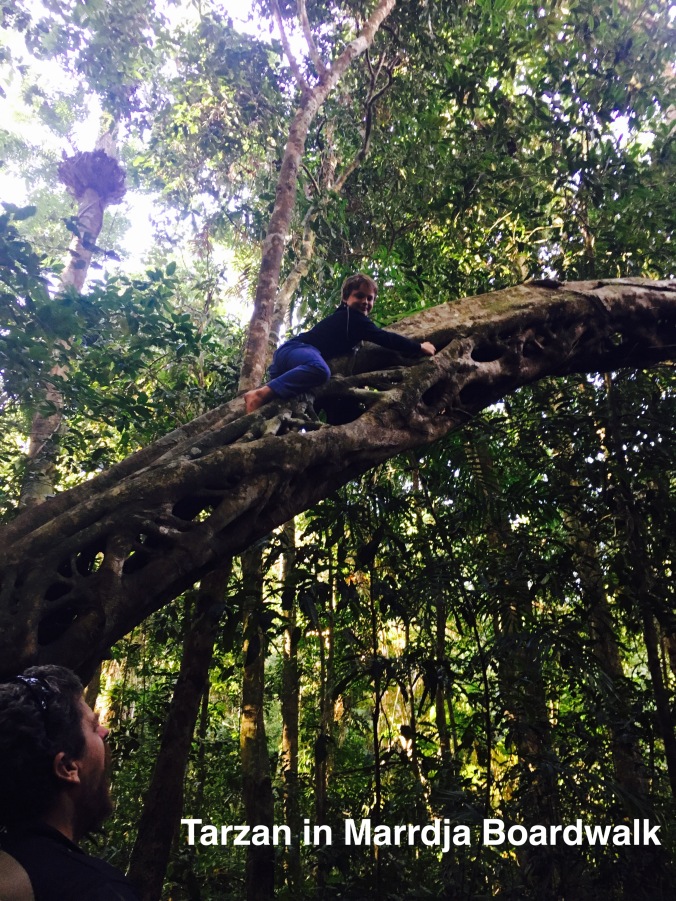 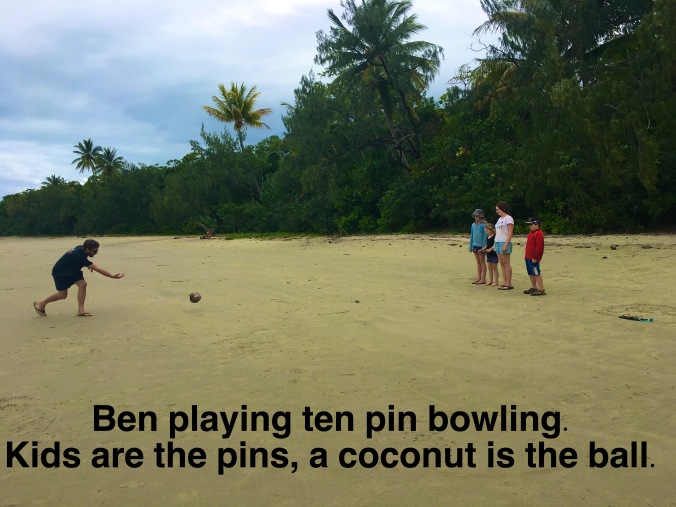 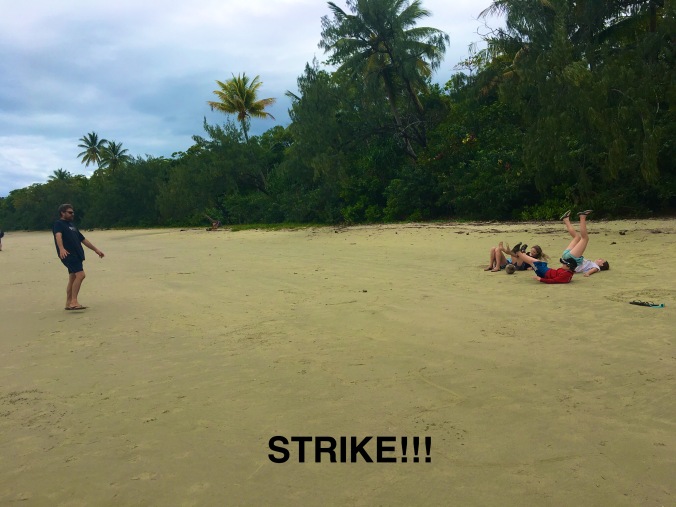 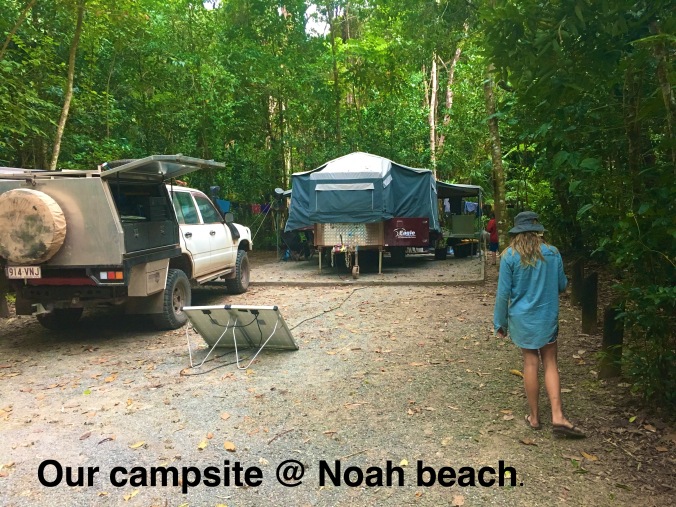 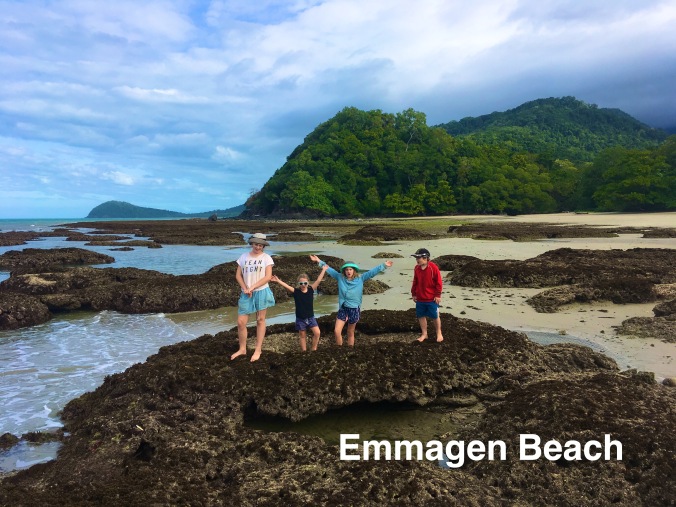 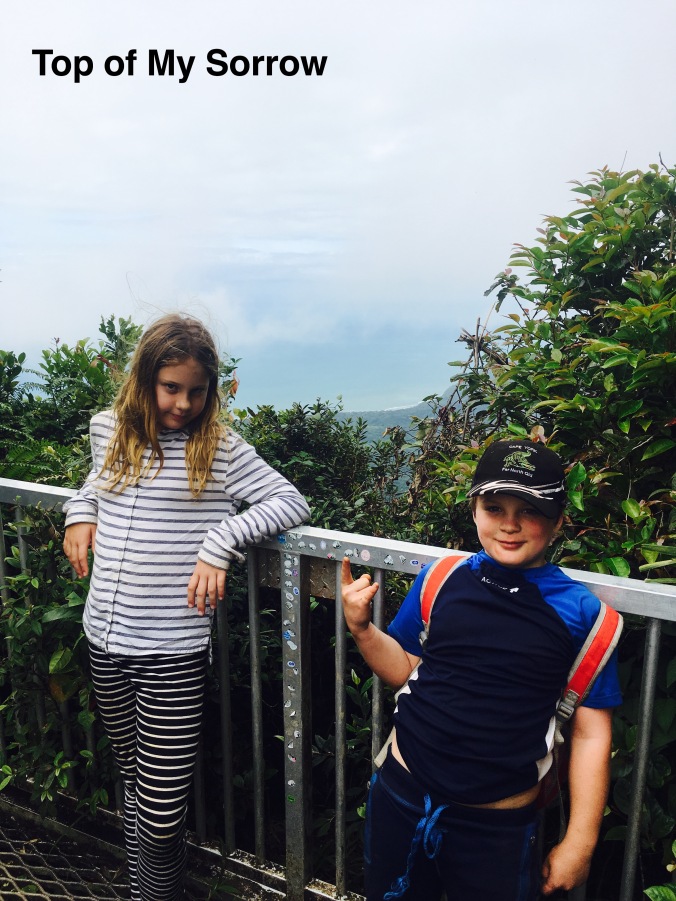 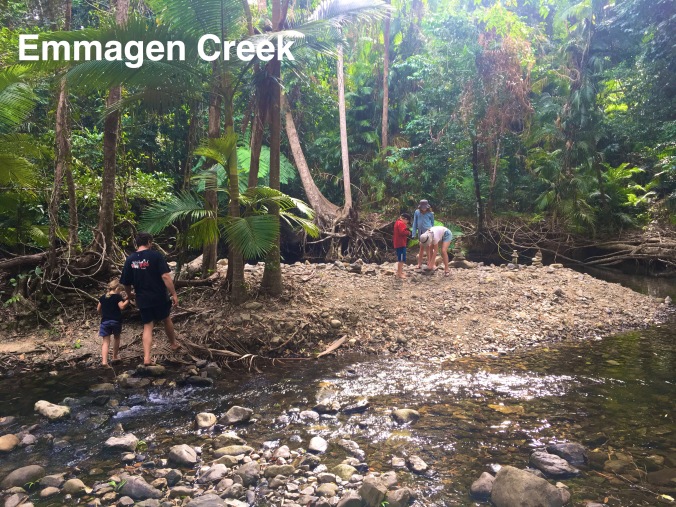 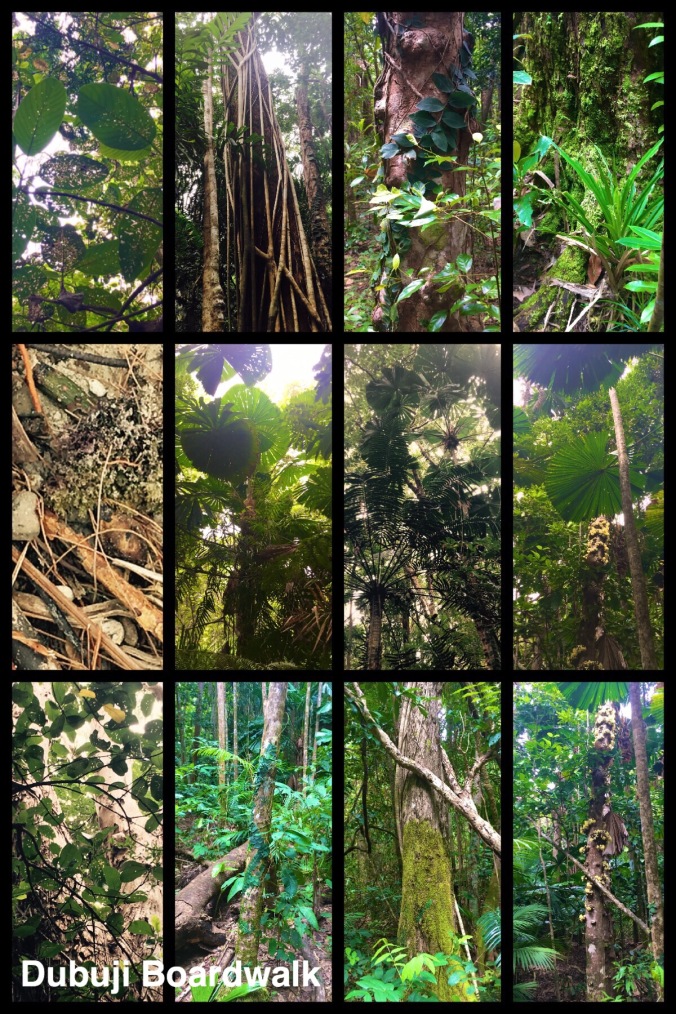 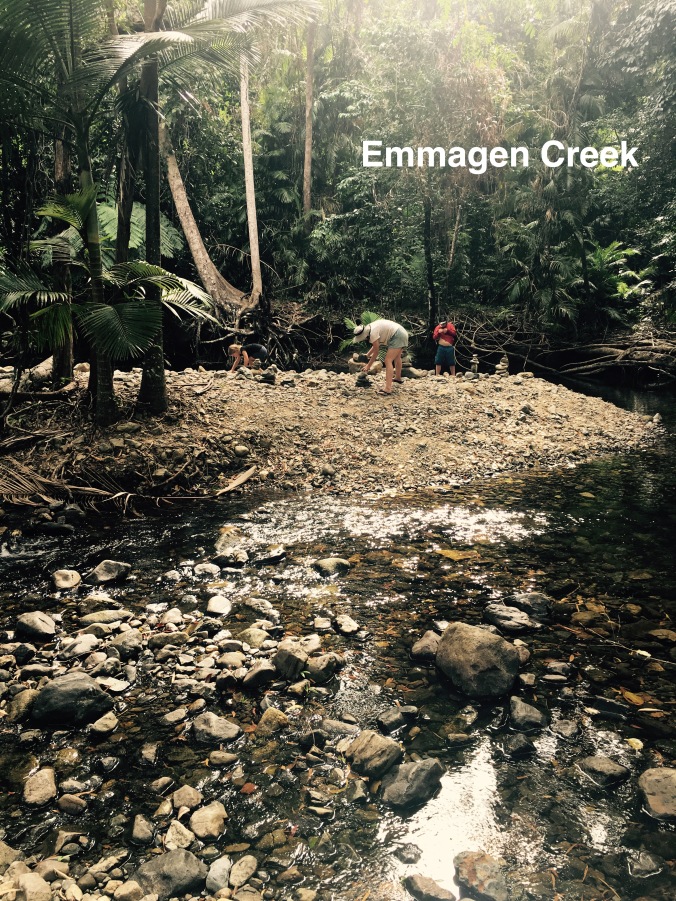